Yes, You Can Have a Bilingual Podcast

The host of podcast ¿Qué pasa, Midwest? explains how the show's bilingual content has helped grow its popularity

When I moved to Evansville, Indiana, from Puerto Rico, I was disappointed by the lack of diversity on local radio and TV. It was an immediate culture shock. There was only one radio show that played Latino music for a couple of hours a day, and if I wanted to know how the immigrant community was doing in the area, I had to ask people on Facebook. 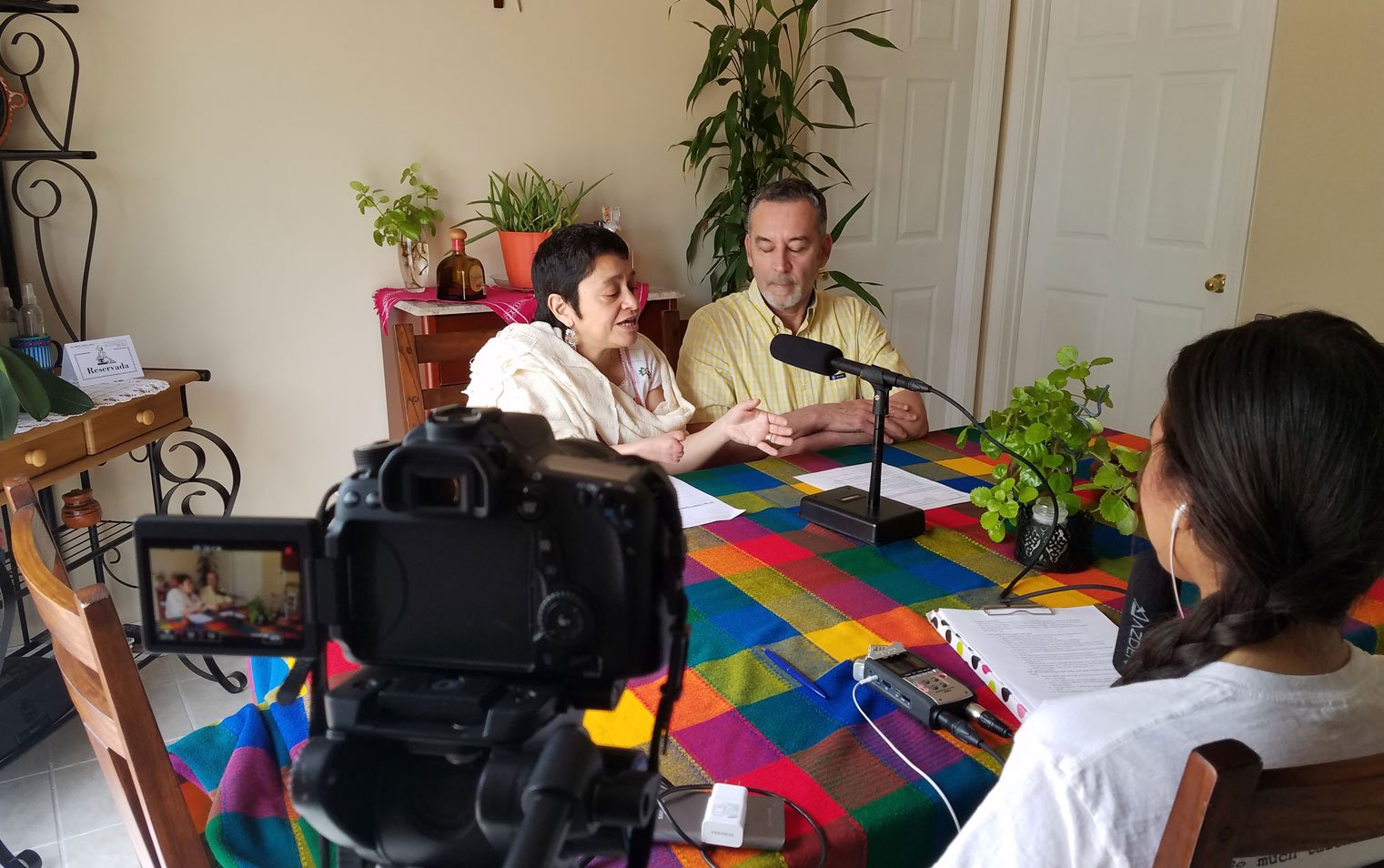 Norma Rosas and Manuel Apodaca, professors at the University of Southern Indiana, are interviewed by the author for the first episode of ¿Qué pasa, Midwest?

When I moved to Evansville, Indiana, from Puerto Rico, I was disappointed by the lack of diversity on local radio and TV. It was an immediate culture shock. There was only one radio show that played Latino music for a couple of hours a day, and if I wanted to know how the immigrant community was doing in the area, I had to ask people on Facebook.

Yet, despite Spanish being my native language, when I first began reporting on the surrounding communities for WNIN, the local NPR and PBS station, the stories were in English, which meant they didn’t reach a Latin American demographic. Talking to people from that group, I realized that, because they only spoke Spanish, nobody had listened to the broadcasts.

So, as a journalist, I decided to produce stories about immigrants for immigrants. I wanted to stay true to the audience, so I did what felt natural to me and my fellow migrants: I made a bilingual show called ¿Qué pasa, Midwest? that told the stories of Latinos in the Midwest.

When I first presented the idea to my supervisors, management was worried we’d lose the thousands of English-only listeners who already tuned in to and supported our content. We had to consider those who didn’t speak other languages, the ones who didn’t like management changing content they’d listened to for years, and the ones who, like me, were always looking for something fresh.

One of the challenges we encountered was that the team at the radio station didn’t know what a podcast was because podcasting was still fairly new at the time, and the station had never produced one. We weren’t sure how to reach a podcast-listening audience nor did we know how to sustain this new audience or how to monetize podcasts.

After receiving a Corporation for Public Broadcasting grant, I attended PRX’s six-month long podcasting training camp and devised a solution: develop a production plan that detailed the number of people we’d reach through a bilingual show, the benefits of serving the Latino community, and the popularity of podcasts among young people, an audience the radio station was trying to reach through its programs.

At first, we went for small adjustments. I would talk in Spanish during my weekend on-air breaks, add salsa or merengue music under them, and when I met people in person, I would talk about how exciting it is to experience other cultures and languages. Then I started reporting about the migrant and minority communities in the area. I always kept the interviews as genuine as possible by leaving longer sections of tape in Spanish.

After many meetings, logo designs, and small tests on air, we decided to create a show that focused on those communities but also featured content they could enjoy — in their language. And here’s what I told everyone who thought this was going to be impossible: Bilingualism is growing, and it will definitely play a bigger, more important role in media and how we experience the world.

Audiences are becoming comfortable with hearing more than one language injected into their favorite shows. Modern Family, Jane the Virgin, and Narcos offer just a few examples. A couple of years ago, it was a risk many media outlets weren’t willing to take. More than five seconds of Spanish in news stories was a delicacy I learned to enjoy because I seldom heard it on air. I held on to those stories for inspiration on what the future could sound like.

And the future sounds pretty bilingual. According to the U.S. Census Bureau, 22 percent of households in the country speak a language other than English. And the immigrant population continues to grow every year. We can’t ignore how travel and the connectivity of social media have opened doors to a more inclusive world — more languages, recipes for new cuisines, dances and landscapes never before seen.

More than five seconds of Spanish in news stories was a delicacy I learned to enjoy because I seldom heard it on air.

This change continues to become more apparent in the content we consume. After producing and hosting our bilingual podcast for three years, more shows, magazines, and content producers have joined us — shows like Hecho en USA, Latino USA, Mamáhood, America the Bilingual, Alegria Magazine, and many more.

It’s all good! In an interview with Latino USA, Viorica Marian, a psycholinguist, cognitive scientist, and psychologist at Northwestern University, said exposure to another language and culture enriches lives and has cognitive, neural, social, and economic advantages, a claim supported by evidence from the National Library of Medicine.

Sharing these stories creates a strong feeling of community in the Midwest for Latinos who’ve relocated there and who are missing an essential part of their native cultures. The stories we tell at ¿Qué Pasa, Midwest? focus on resilience, adaptation, and growth — stories most Latinos identify with.

On the other hand, the English-speaking audience has also responded very positively. Because, although they don’t speak Spanish, they can easily follow the story and understand what it’s about. Many of them have told us through social media that their children are taking Spanish classes at school, and they enjoy our podcast. Our listeners get excited at being able to understand the stories.

Social media has also helped us discover that our audience didn’t know some of these stories were taking place, like our “Parole in Place” episode, or that they’d never heard anyone tell their border-crossing experience, as in Amalia’s episode. We don’t believe ¿Qué Pasa, Midwest?  has changed English-speakers’ minds about Latinos, because most of our listeners already support the immigrant community, but we believe that the more inclusive the conversation, the better.

As bilingualism continues to grow, so does the way we consume it. I always advocate for giving your audience the benefit of the doubt. Challenge them without losing their interest. Today, ¿Qué Pasa, Midwest? continues to make bilingual content on Facebook, where we share it with more than 10,000 followers, and Twitter, where it receives 18,000 daily impressions.

Our bilingual podcast has opened doors for many to organically tell their stories in a way that relates to their community and loved ones. And it has proven to us that our way of consuming news and entertainment will continue to evolve with time and technology. So have faith, try something new, and challenge your audience.