The Only Thing Between You, an Accidental Leak, and Getting Fired

With SafeStream, you’ll protect your content and your job

Imagine this scenario: It’s the Monday before the Super Bowl, and your team has officially wrapped the trailer for the summer’s highly anticipated superhero prequel. No one’s seen the trailer but you, the team, and the studio execs. It’s from one of the biggest (and most secretive) studios in the world — keeping the trailer under wraps is mission critical.

You get into the office — it’s pandemonium. The trailer has been leaked! Your colleagues are all over each other and Twitter, where the trailer is trending in forty-seven countries. Your team is freaking out, and your boss is walking towards you, fuming.

This scenario isn’t far-fetched. It can (and does) happen to studios, agencies, production companies — you name it. You might be surprised at how mundane actions like sharing your passwords or leaving your iPad lying around unlocked can make your content vulnerable to hacks. Like your data, your content is valuable — and it can be stolen anytime.

According to CreativeFuture, a nonprofit focused on protecting artists and creative workers from for-profit piracy, core copyright industries (film, TV, music, and publishing, for example) added more than $1.2 trillion of value to the U.S. GDP in 2015. That’s bigger than aerospace, agriculture, and pharmaceuticals, accounting for almost 7 percent of the U.S. economy and employing more than 5.5. million people. At the same time, online piracy has grown into a massive criminal industry; in 2014, the top 30 cyberlockers made nearly $100 million per year from stolen creative works. The costs to content producers are both external — managing reputation, copyright lawsuits, and clean-up — as well as internal: the time, money, and effort sunk into producing the content, as well as the risk of creators losing their jobs.

A cyberlocker is a third-party file-sharing service that provides password-protected cloud storage. While legitimate services like Dropbox and MediaSilo are useful for the transfer of files with friends and coworkers, cyberlockers can also be a convenient and anonymous way of sharing copyrighted content like large movie and music files. According to former Paramount Pictures COO Frederick Huntsberry, “cyberlockers now represent the preferred method by which consumers are enjoying pirated content.”

Now, there’s a simple and secure way to get ahead of leaks before they start: SafeStream watermarking.

Al Perry, VP of intellectual property protection at AMC Networks, has said that, “Watermarking is an effective deterrent,” especially when the feature is designed to be “convenient, not costly in terms of resources or time or money.” Here at Shift Media, we prioritize user experience right alongside security.

Indeed, SafeStream is the only real-time content-security technology of its kind. It burns a personalized, traceable watermark with visible and/or invisible user data onto each video. The visible watermark ensures people know they’re getting a personalized copy, so they’re less likely to mishandle the content. The forensic watermark — the invisible tracking — is for accountability; it helps you trace leaks back to the source. Used together, visible and forensic watermarks can act as insurance for your video content. 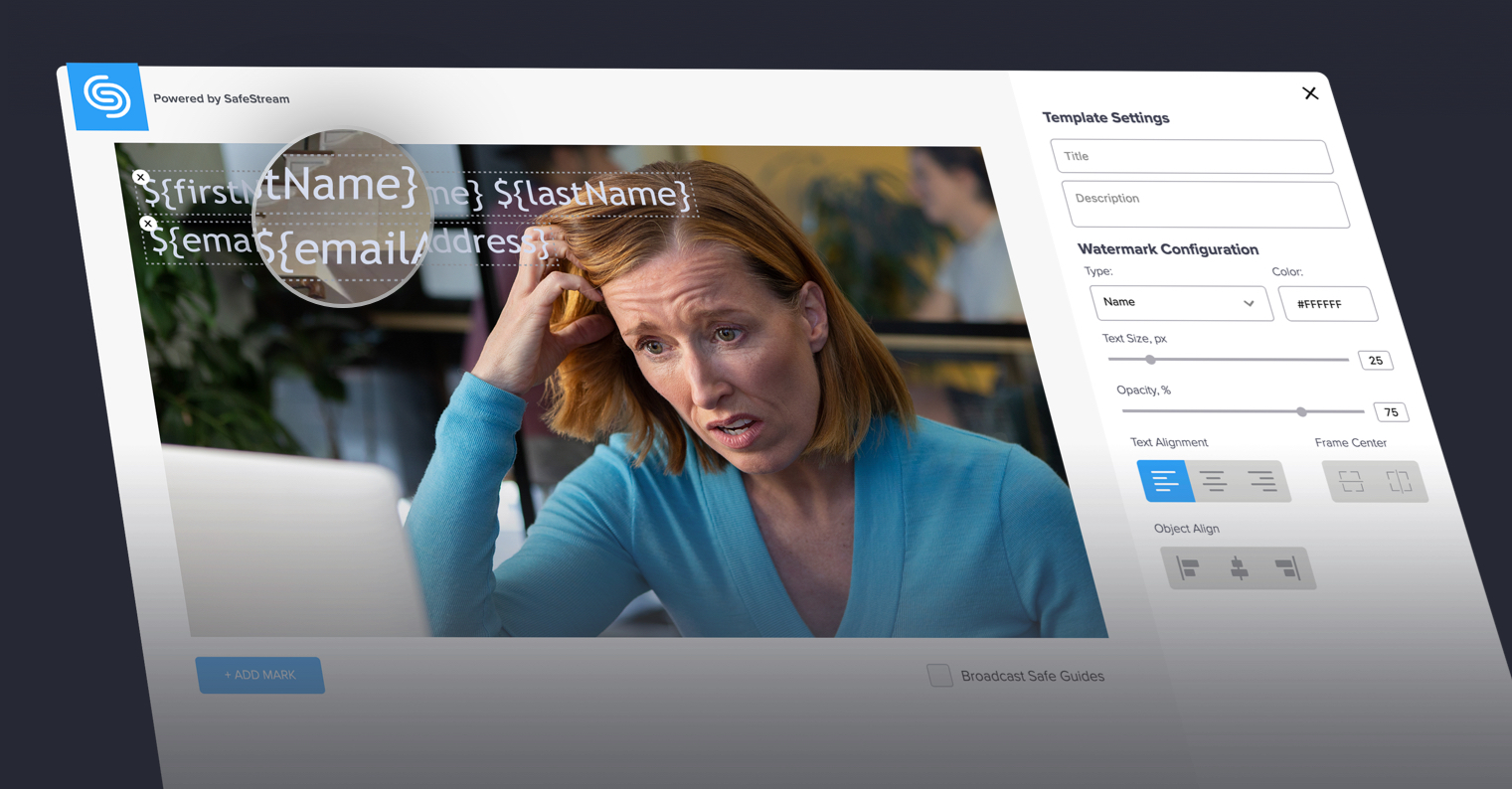 SafeStream is simple to use, whether for Television & Film or for Business. SafeStream for Television & Film uses a combination of forensic and visible watermarks, while SafeStream for Business relies on an intermittent visible watermark deterrent. The visible watermark discourages viewers from sharing it in unauthorized ways by embedding each viewer’s personal information directly into the video, letting them know that your content is secure and you’re prepared for piracy. The forensic watermark is imperceptible to the eye, and ensures that every copy of the video can be tracked to its viewer.

Reach out to us at info@safestream.com with any questions or to get started today.

Jane Zhang is the Product Marketing Manager at Shift Media. She oversees user onboarding and educates them on how to best use our products for their workflows.
Read more by Jane Zhang