Navigating the various stages of your show’s approval process can be tricky. Learn how to streamline the process and get approvals quickly while making the best show possible. 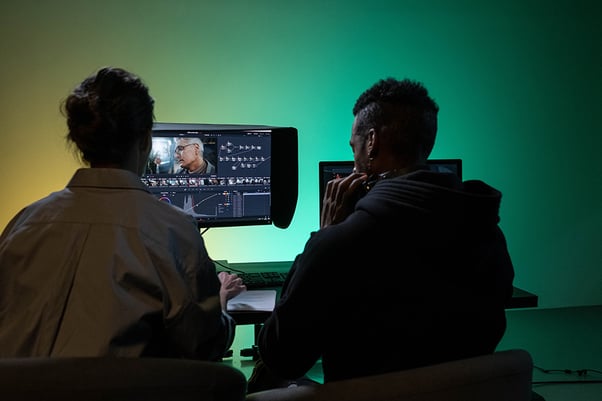 As you sit and stress about all the different people who have to give an episode of your show their blessing, it can seem like there are way too many cooks in the kitchen or that the approval process is byzantine and endless. But all time and layers of the approval process are there for a reason, and you can use them to create a better show. It’s all about understanding why each stage is there and what it’s supposed to accomplish. Think of those layers as chances to make the show better rather than hurdles to clear. Your team was assembled because of its experience, creativity and skill. The approval pipeline can be the key to unlocking all of those assets.

The Order of Operations Exists For a Reason

While the showrunner’s approval is often the primary goal, and the most important consideration, the approval process in episodic television also involves a number of other stakeholders, and there is a traditional order to the creation process for a reason.

Once filming for a given day has been completed, the footage is sent to the editor. In most cases, editing work is anywhere from one to three days behind the actual filming, up until the episode’s shoot schedule is complete. The editor may be working remotely or may actually be on set, which can help close the gaps between what is shot and what is needed in the episode. In that time, the editor will usually make a first assembly, trying to get all the basics of the story and structure into a working cut. The editor will typically have between one and six days after receiving all the dailies to create an initial assembly to send to the director. That stage is very important structurally and adds a lot of value to the final episode, because editors tend to work on multiple episodes and are usually more familiar with previous episodes and the show’s ongoing tropes and style.

As the footage is given to the editor, the director will usually provide some direction about how the episode should be put together. At the same time, the script supervisor has usually provided notes and insights based on what happened on set. These notes also add value and often can help the editor discover aspects of the footage that might not otherwise have been apparent.

Once the episode’s filming is complete, the director and editor will work for up to four days to make the director’s cut of the episode, which is normally the first official milestone in the post-production pipeline. Before the pandemic, it was common for directors to physically sit with the editor while working on the director’s cut if the director wasn’t committed to working on other projects immediately. That opportunity for close collaboration was a valuable part of the process, and trying to maintain that same level of interaction with today’s workflows is an important consideration. With modern production tools and workflows, live remote editing can accomplish many of the same things, and the rest is achieved through digital collaboration platforms such as MediaSilo, email and any other means available. 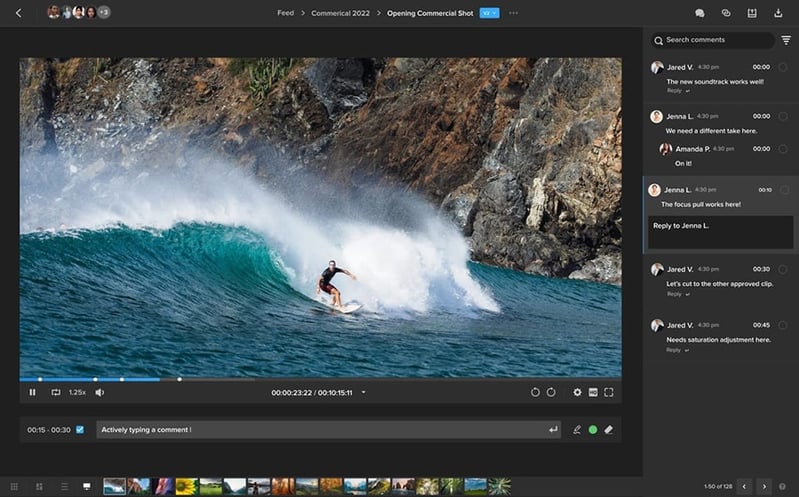 While creating the Director’s Cut, the director and editor can drill down on specific shots to ensure delivery of the showrunner’s vision.

Episodic television is an unusually collaborative medium, and great shows benefit from the creative imprints and inputs of every team member. Even though there will be other levels of approval after the director’s cut, it’s important to treat each one as a separate stage, because each one adds a different value to the process. Skipping ahead before creating the best director’s cut can leave great creative ideas on the editing room floor. Many of the industry’s top showrunners like to let the director experiment a little at this stage rather than insisting on having them present the script as shot. Making sure the director at least gets to the point where the cut lines up with the vision of what they were trying to shoot is a critical part of creating the best final product. This is even more true in serialized shows, which are often less dependent on a strict formula.

Because directors tend to only work on just one episode per season (or a small handful), a talented helmer often can provide new ideas and insights that might have eluded the ongoing team members. Focusing on the ideas of the director at this point helps introduce fresh and exciting ideas that haven’t been part of other episodes. There will be plenty of time to get things back in line with existing stylistic aspects of the show afterward, but the director’s cut provides a unique opportunity to get original input into the episode from a new viewpoint. And this kind of input can help keep a show interesting to viewers, eliminating predictability and repetition.

The showrunner steps in

Once the director’s cut is complete, it’s time for the showrunner and producers to come into the process and make the episode part of the greater whole. As the central creative visionary behind the show, the showrunner needs to make sure that the cut fits with the previous episodes and that it leads properly into planned upcoming episodes that haven’t yet been filmed. While the director may have treated the individual episode as a standalone creative opportunity in some respects, it is the showrunner who makes sure that the episode fits with the entire show’s arc. Just as the director’s cut provides new ideas, the showrunner makes sure those ideas fit with the overall direction of the series.

This stage is also when the showrunner may get input from the writers and other producers to ensure that the episode is coming together as they had envisioned. The showrunner collects notes from the team and makes sure the cut is working for them before finalizing the producers’ cut. Because the showrunner is the show’s creative shepherd, this stage of approval is the most critical creative stage for the episode’s outcome. If the showrunner is happy, then chances are most others will be as well. 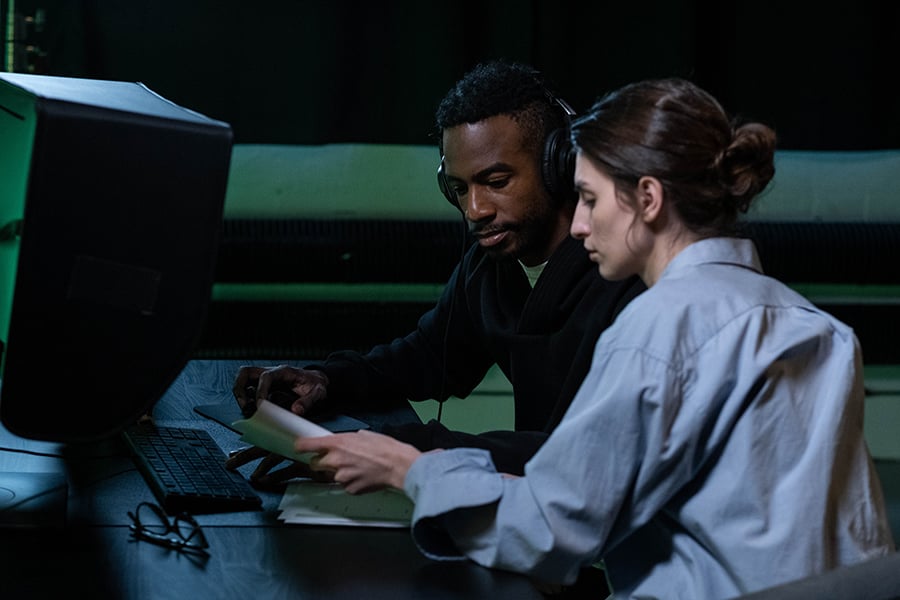 Other stakeholders make their mark

While the showrunner represents the show’s creative vision, episodic television is a business, and there are many concerns and interests involved. In some cases, the showrunner’s cut will move forward in the post-production pipeline with only minimal additional input from the studio, network, and sponsors. But those viewpoints are still very important aspects of the creation process. Once the showrunner is satisfied with the episode’s rough cut, it’s time for the producing studio’s producers to weigh in. Just as the showrunner is focused on maintaining the creative vision and protecting the story, producers will have the studio’s interests in mind. They might be thinking beyond the story or individual show to how it reflects on their larger plans. Beyond the producing studio, there are also network stakeholders and executive producers who need to weigh in on how the episode fits with the image of the network and with the needs of potential advertisers or sponsors. And in some cases, those advertisers or sponsors may even get to review the content themselves.

Though some may think of this part of the process in purely negative terms, it also can present an opportunity, creatively speaking. The best producers will use this stage as a chance to make the show even better, not just rein it in and keep things “safe.” Any creative person can sometimes get too mired in personal aspects of a story or be too close to it to see flaws. A savvy and experienced producer, while also seeking to represent the studio, network or stakeholder’s interest, might also be able to provide insight into the minds of the larger audience and what is likely to appeal to them. So this stage, when used correctly, can actually improve the final product by making it more universal and helping connect the show more deeply to the audience.

Using each of these approvals as a way to make the show better is the way to end up with the best product at picture lock. It’s important for the creative team to be open enough to outside input that opportunities aren’t missed. At the same time, it is incumbent upon the studio, network, and sponsors to operate from a place of creativity and opportunity rather than fear and defensiveness. Make things the best you can rather than the least risky. No one remembers safe, and that’s usually more dangerous than any risk you might take.

While the showrunner has been the guiding figure through edit approval and picture lock, there’s still work to be done. Generally speaking, the picture-locked cut will still require a whole range of adjustments, including the creation and insertion of visual effects, sound design, additional dialogue recording, and color correction. And many of these elements will be created by outside vendors and post houses. With the showrunner less present, it usually falls to the Post-Production Supervisor or Post Producer to bring it all together and make sure all of these elements proceed in a way that enhances the final product. In a perfect world, each of these elements has a chance to make the show better and more engaging. And while the showrunner and producers will eventually sign off on the finished product, it’s the Post-Production Supervisor or Post Producer who must make sure it’s all going according to plan.

Once all of the finished elements are in place, the editor or editors will be asked to check all of the post-work and make any needed adjustments. The mix will be reviewed on a mix stage or at the post house. Then the showrunner and writers will give their signoff and sometimes be part of the team that attends the final laybacks. If all goes well, there are few surprises or changes at this point because communication has been consistent and thorough.

In the next installment of our guide, we will look at how each player on the production and post-production teams can put their mark on a show and make it better than the sum of its parts.