A graceful exit just may be what saves your life 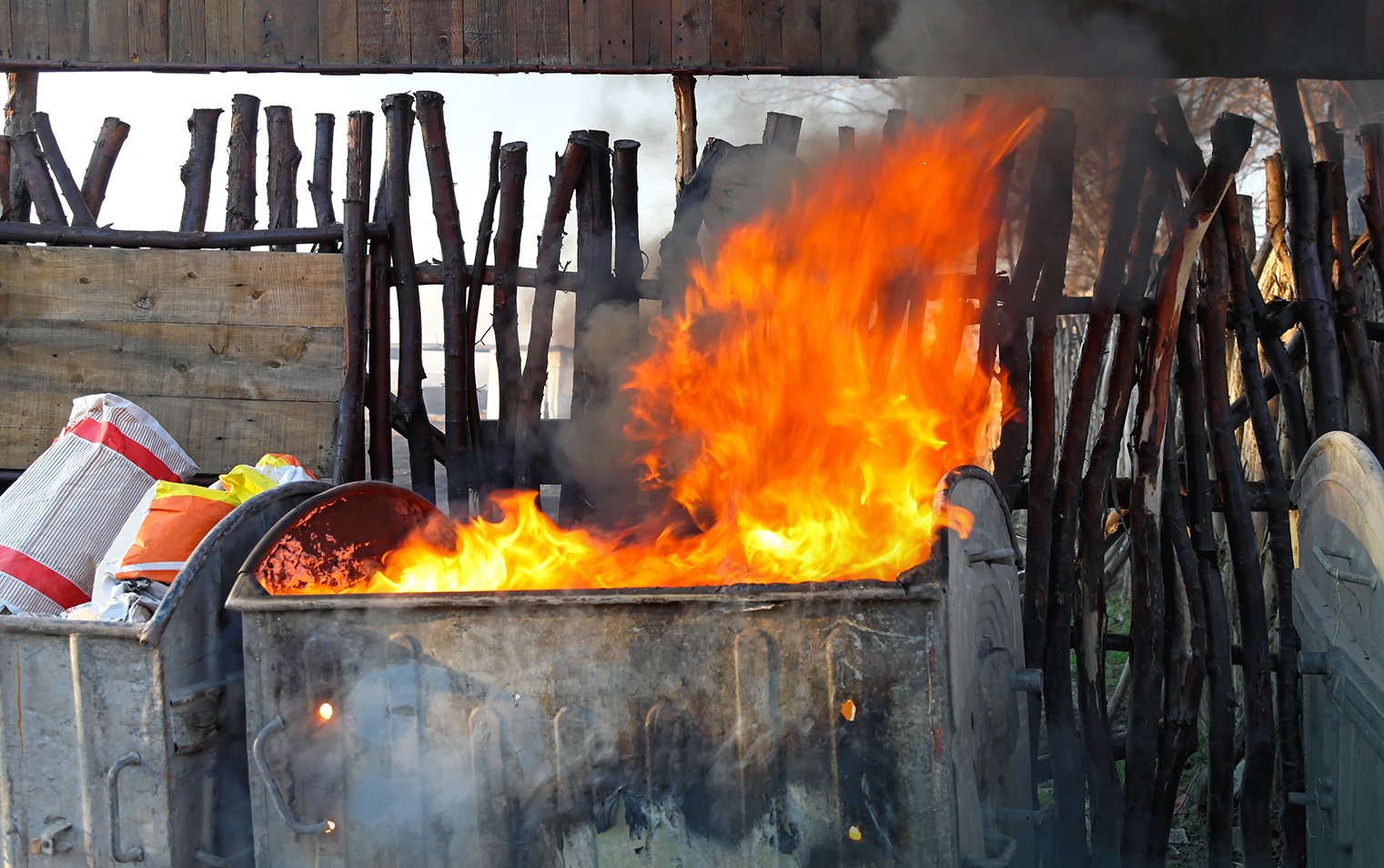 Working on a movie is never a walk in the park, but some productions can be worse — much, much worse — than others. Over the past decade of working in independent film from PA to producer, I’ve come across my fair share of dumpster fires. Most of those shoots had red flags, but it’s taken many years of trial and error to learn when to spot and heed them.

Below are a few red flags to note before stepping onto a film set. They are by no means absolutes, but they do provide guidance. And, as bad as a dumpster-fire experience can be, sometimes it teaches you more than you'd ever learn on a perfect set.

Don’t get me wrong — working on low budget films is super important, especially for early-stage filmmakers who still need to pay their dues. But there are ways you can protect yourself from truly awful situations.

If you’re offering your services for low to no pay, for instance, always make sure you’re taken care of in other ways. Along with the job offer, a good producer will let you know what the production will provide, be it meals or a travel stipend.

If the job is out of town, you might want to ask about travel to and from the location, as well as accommodations. Before I knew to ask, I was on a job that involved driving from New York to West Virginia and then staying on cots in a school that had been shut down for having the lowest test scores in the state. The male crew members had to share an open shower with soldiers from the U.S. Army who were also staying at the school while building a helipad for then-president Obama to land at the upcoming Boy Scout Jamboree. The experience was a good reminder to find out what you’re getting into before actually getting into it.

Depending on your position, if you’re not getting compensated adequately, you may want to ask if the company offers deferred pay or backend points. This means that once the film is in the black, you’ll get paid. Seeing the money is rare, but the thought is still important because it means they value their crew enough to share potential profits.

In those instances when you actually are getting paid, you should be wary of last-minute rate changes. It usually means something happened to the film’s funding, but they’re proceeding anyway. My friend Marissa, a freelance filmmaker working in production who lives in Oklahoma, was asked to come on board a feature in Colorado. She was hired as a PA at a certain rate and then, midway through a thirteen-hour drive across the country, she was informed the rate had to be cut in half but that she’d get a bump in her credit. In some instances, a higher credit for less pay might be a good trade-off because the better your credit, the quicker you can move up the ranks. But the way it went down for Marissa was a definite red flag — namely because she was halfway to Colorado already so had to take the chance.

A higher credit for less pay might be a good trade-off because the better your credit, the quicker you can move up the ranks.

For me, I was once interviewed to be the second assistant director on an ultra low-budget feature. The production company offered no pay but a good experience. Freelancers across all industries hear that a lot, but it’s only true some of the time. The hard part is determining the good from the bad. For this particular production, I was asked to sacrifice a month of my life unpaid, so I asked if the company could pay for my New York City MetroCard. At the time, that would’ve translated to $5 or less per day, but I was told no. I decided to turn the job down. I thought that if I felt I was worth less than $5 per day, then I wouldn’t feel very good on that set. Someone later told me that the shoot was a disaster.

Even if you’re not getting paid, try not to go out of pocket. Make sure you feel as though your service is valued, even if not for the actual amount your time is worth.

Working with a new director can be the best experience of a lifetime, but it can also be a total nightmare. The novice directors who are the most dangerous to work for are those who’ve never worked on a film set before, the ones who buy their way into the industry and have never actually climbed the ladder of film production. Be extremely wary of them.

Conduct due diligence: Use IMDB to help you suss out who you’re working for. Even if the producer or director hasn’t had those exact credits before, it’s important that they have some industry credits so they at least know how a set works and how to treat their crew. It’s also helpful when a new director is accompanied by a more seasoned producer. When both are totally new to the industry . . . well, it may be best to avoid the production altogether.

When you’re asked to hop on a job at a moment’s notice, it usually means someone’s dropped out or left in the middle of a job, and it’s worth asking why. It’s typically for personal reasons and nothing to worry about, but if you’re more than the second replacement in a position since shooting began, that’s probably a red flag. One of the crazier films I worked on went through seven first ADs over the course of a single month. I was the second AD, and it was my second job ever — a learning curve, to say the least. By the end of that shoot, the key grip was our first AD, per the lead actor’s request.

Films also sometimes relocate shoots to different states at the last minute — another warning. Like the rate, it usually means there was a major change that was outside of the production’s control. You can assume they’re scrambling to fix it, and other things may get lost in the shuffle; perhaps they’re going for a more favorable tax break or a specific location, but either way, last-minute changes usually lead to a lot of confusion.

The film industry is all about word of mouth, so if you hear something fishy about a company from multiple people, it’s worth looking into. I used to work for a company associated with a well-known actor who was notorious for never paying people on time (or at all), but I worked for the company anyway. To no surprise, the payment schedule was a disaster, which not only affected the crew (who weren't getting paid) but also the reputation of the producers who had been hired.

Remember the companies you hear of that have bad reputations and sidestep them in the future. Sometimes you can even find public Facebook or blog posts about the especially notorious ones.

You missed the red flags. When and how do you walk away?

Safety is the number one reason to walk away from a film shoot. I’m not being glib; film sets can be fatal. Take, for example, Midnight Rider, the Allman Brother’s biopic where a young assistant camperperson, Sarah Jones, was killed due to a producer’s negligence. In the news coverage after the tragedy, the crew talked about a number of warnings ahead of the fatal incident. Even Jones herself had expressed concern to her father the night before the tragic accident.

But the challenge to being a crewmember is that you often feel at the mercy of the production company: They control when and what you eat, where and when you sleep, what risks you take. It’s a lot of faith to put in someone, especially if it’s undeserved. If the film is of a certain budget size, there are at least unions to which you can report improper conduct, but if it’s a non-union job, it’s really up to you to protect yourself. Even if the job is union, there probably isn’t anyone on set actually monitoring the day to day. If you start to lose faith in a production that you’re on and feel like the crew’s safety isn’t being valued, speak up and, if that doesn’t work, you may need to walk away.

They control when and what you eat, where and when you sleep, what risks you take. It’s a lot of faith to put in someone, especially if it’s undeserved.

That may sound harsh, but let’s go back to Marissa’s production in Colorado. They were shooting in terrible conditions, and for aesthetic reasons, the director had picked a location that required the crew to drive along the edge of icy cliffs. By the time Marissa left the production, eighteen cars had skidded off the road, and one woman had to be airlifted out after flying off a cliff. The crew was in Colorado, many far from home and many in need of a paycheck, but at some point, Marissa decided that her safety was more important and walked.

My own horror show of a shoot resulted in the crew staging an intervention with the director and producer after being forced through many unsafe driving scenes, insane turnaround times, and unreasonable travel hours. No matter what you’re getting paid, you deserve safety and sleep. (Naturally, the two go together.)

But one scare when choosing to step away from a job far from home is how you get back. Oftentimes, you’ve been flown out to a remote location or, like Marissa, driven a long distance. Who will cover your airfare or gas home, and will you get paid for the work you’ve done? Marissa handled her situation the right way. After reaching her breaking point, she walked into the production office, demanded her check for the days she’d work, as well as gas money for her ride home.

Luckily, the production knew how dire the circumstances were and didn’t fight her. It may be challenging, but it’s always important to stand up for yourself, especially when you’re in the right. No director’s vision is worth the safety of the crew.

These red flags are important to think about as a crew member, but if you’re the one in charge, they’re even more critical. You need to  remember how much power you wield and how much faith your crew puts in you. Film sets can be dangerous, and it’s important to always be aware of that during the shoot and to stay vigilant no matter your role.

Sophie Finkelstein is a producer and screenwriter from New York City. She’s worked in independent film for the past decade and has an MFA in screenwriting from Columbia University. She's in development on a number of television shows and features both as writer and producer. She produced the critically lauded The Revival; Rose Troche’s VR piece, If Not Love, which premiered at Sundance; and numerous shorts and music videos. Sophie is also a director for the Hot Springs Documentary Film Festival.
Read more by Sophie Finkelstein