How to Handle Late Payments When You're a Freelancer

Follow these best practices to protect yourself against exploitation 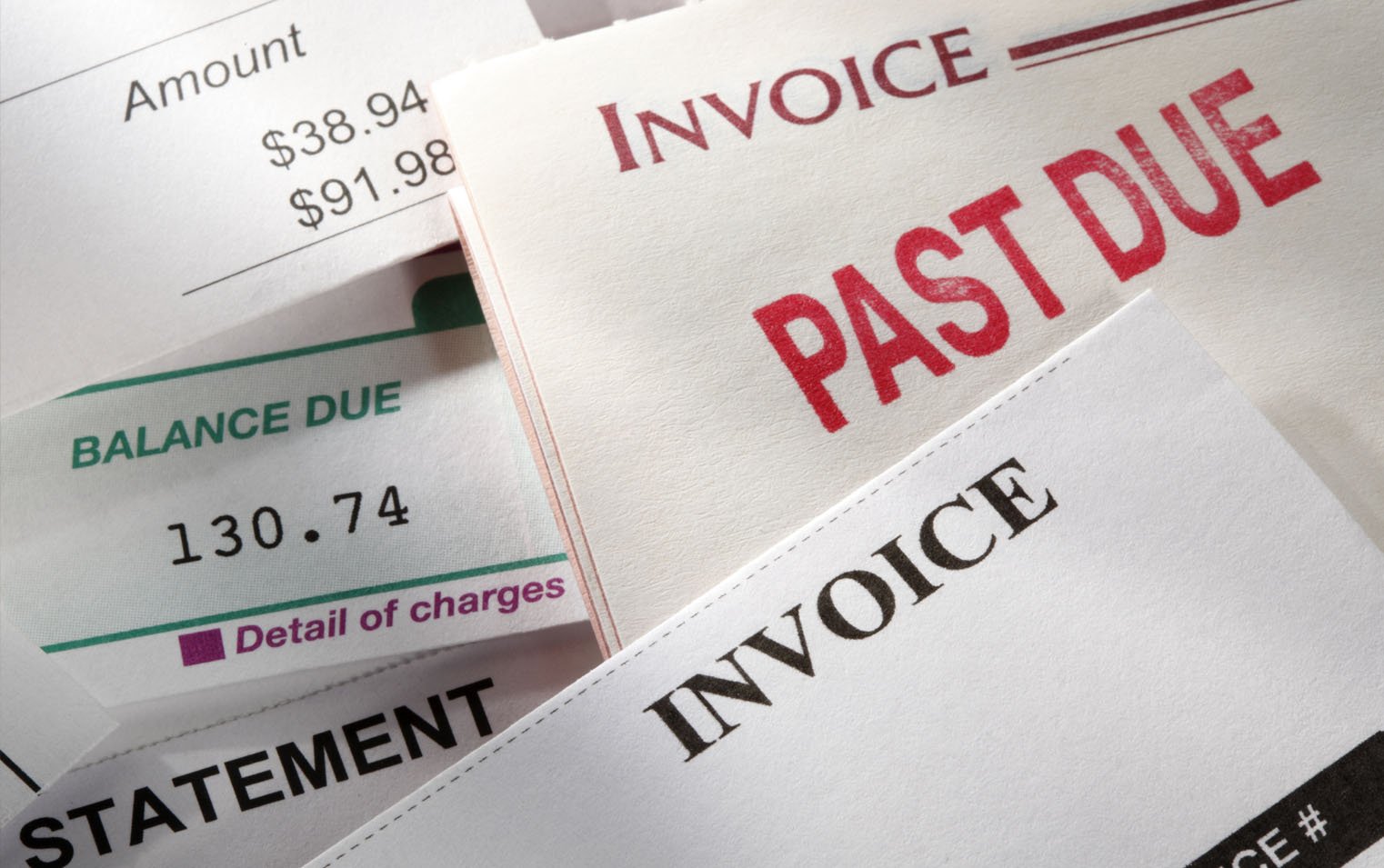 Every freelancer has experienced this: waiting for a check or automatic deposit to arrive; a payment that continues to run late; following up with clients on unpaid invoices.

And every freelancer also knows that working for yourself means accepting the risk that there will always be clients who fail to pay on time or, in some worst case scenarios,fail to pay at all.

Unfortunately, late payments are all too common at every level, from independent contractors working solo on their laptops at cafes the world over to small startups trying to get their businesses off the ground. In fact, a 2018 survey by Bill.com — a leading digital payment service — reported that 86 percent of freelancers want to receive payments from clients electronically to avoid late payment and cash flow slowing to a trickle, with 41 percent of freelancers requiring clients to pay digitally.

Moreover, according to the same survey of more than 1,400 U.S-based freelancers and contractors, more than half — 54 percent — said it took too long to get paid, with 50 percent reporting they were waiting for checks and 45 percent stating clients failed to pay them on time. Waiting to get paid is particularly difficult if companies have 45- or 60-day payment terms, which can be a real burden on self-employed individuals trying to make their rent or mortgage.

On top of that, one company — Contently, which used to champion freelance work — sought to generate revenue by charging contractors a fee for using its platform to process payments from their earnings. So, if a client owed a freelancer $100, and the freelancer used Contently’s platform to process the payment, the company would take 4.75 percent of that payment so that she would earn $95.25, not the full $100. Contently’s announcement generated such social media outrage that, in March 2019, Contently CEO Joe Coleman conceded that the idea had been a bad one.

Late payments can potentially add up to significant economic effects given that the gig economy in the United States now totals 60 million workers, becoming an ever-growing segment of the American workforce. In addition,by 2027, the majority of U.S. employees will be contractors, according to a survey by Freelancers Union and Upwork. 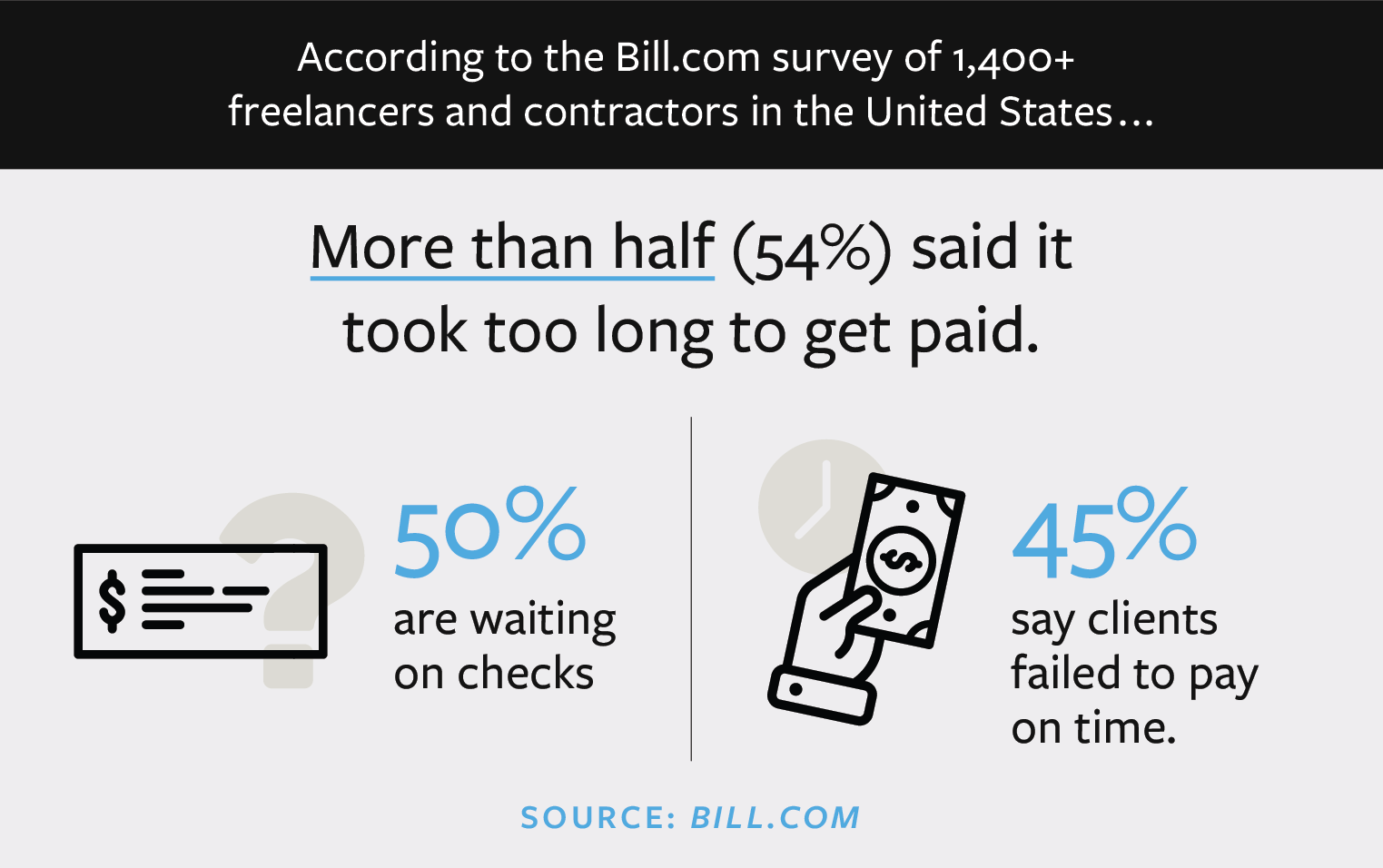 Clearly, freelancers are a growing force in the economy and not alone in their quest for timely payments. Resources including Freelancers Union (which declined to be interviewed for this story) and Freelancer Advocate work to ensure contractors are treated fairly as contractors’ gain more influence in the marketplace. Freelancer Advocate provides contractors with online courses, presentations, articles, and other resources so that freelancers can better negotiate fair contracts and fair, timely pay. Founder Dave DiVerniero says that best practices need to become more standardized and that freelancers need to understand what they can do to ensure they’re paid for their work.

“Freelancers are in the precarious position of being easy to take advantage of,” says DiVierniero. “Paying freelancers is an easy expense for clients to put off or avoid. If you want to ensure you get paid — contracts, contracts, contracts. Every freelancer, every job should have one. They should contain clear terms for when the contractor is paid and some penalty for late payment. Personally, I have extremely harsh late payment penalties. I rarely need to enforce them, but it acts as a wonderful deterrent. A deposit is nice, but a contract is an absolute must.”

“Paying freelancers is an easy expense for clients to put off or avoid.”

Assertiveness and a thick skin are important when working for yourself because chances are, as a contractor, you’re going to face that awkward conversation about money, which is what happened to Seattle-based writer Pam Mandel, who’s been freelancing for more than twenty years. Months went by without payment from a client, and Mandel found herself picking up the phone and saying to the person on the other end, “‘Is there a reason you cannot write me a check right now?’” She adds, “The silence was so awkward, and I just waited it out. I had the check three days later. I treat getting paid like any customer service issue.”

Have a say in your contract

The best way to avoid late payments is to have that conversation up-front when hammering out a contract with your client. Freelancers Union offers a step-by-step guide to walk freelancers through negotiating a contract and prompt payment.

Finally, when all else fails, don’t be afraid to let a client go. Freelancers shouldn’t hold on to clients who don’t pay them, and DiVierniero says pushing a client a little shouldn’t harm the relationship. Sometimes, it might be easier to deal directly with a contact person in billing or someone who handles payroll.

Some advice on social media

Social media can be a resource in terms of letting freelancers know which outlets have a reputation for not paying their contractors in a timely manner. Who Pays Writers is an anonymous, crowd-sourced platform that frequently posts on its Twitter account updates about freelance pay rates, and contractors will share online who pays well and who doesn’t. But should you take to Twitter or Facebook to vent about a delinquent client? Maybe ask yourself if shouting from an online soapbox will actually achieve your goals in getting paid.

“It pretty thoroughly burns a bridge, which, depending on how late payment is, you may not care about, and many clients may not be swayed by such a stunt,” says DiVierniero. “Embarrassment can be a powerful tool, but it's better wielded by contacting a client's superior or their client.”

Social media, such as Freelancer Union’s Twitter account, however, can be a helpful tool in connecting frustrated contractors to resources that result in money in the bank. The goal is to get paid and not lose your cool. The more freelancers work together to share best practices and solidarity in receiving timely payments, the more productive we can all be.

Katrina Woznicki has worked as a journalist for more than twenty years. Her features and essays have appeared in National Geographic Traveler, AFAR, The Washington Post, The Los Angeles Times, ELLE, and U.S. News & World Report.
Read more by Katrina Woznicki