Most of the great auteurs have worked with only a handful of editors across their entire careers. Long-running director/editor teams include Pedro Almodóvar/José Salcedo, David O. Russell/Pamela Martin, and Sofia Coppola/Sarah Flack. These relationships can last decades because the director/editor relationship is arguably the most important in filmmaking. Developing a shared language, intuition, and style is vital. When you find someone who just instinctually “gets” you, you hold on to them, learn from them, and hopefully make magic together.

For director Andrew Ahn and editor Katie McQuerrey, their magic is the indie feature Driveways, now a festival and critical favorite. Fresh off premieres this year at Berlinale and the Tribeca Film Festival, Ahn and McQuerrey credit the success of the film in part to the strength of their director/editor relationship.

The movie is a poignant family drama that follows an introverted boy and his mother as they travel to upstate New York to clean out her recently deceased sister’s house. While his mother prepares to sell the house, the boy faces off against neighborhood bullies and forms an unexpected friendship with the retiree next door. The film, shot on location in New York, stars newcomer Lucas Jaye, Hong Chau (most recently from HBO’s Homecoming), and veteran Brian Dennehy.

Ahn’s first feature, Spa Night, premiered at the 2016 Sundance Film Festival and won the John Cassavetes Award at the 2017 Film Independent Spirit Awards. Even with that pedigree, Ahn counts himself lucky to have partnered with esteemed producer James Schamus, the former CEO of Focus Features who’s been making films for thirty years. Schamus, in turn, recommended editor McQuerrey, whom he knew from her work on Joel and Ethan Coen’s films Burn After Reading and A Serious Man, both made while Schamus was still at Focus. (In addition to a myriad of film, TV, and documentary editing credits, McQuerrey has worked on a whopping eight Coen brothers films, from assistant editor on 2003’s Intolerable Cruelty to additional editor on 2016’s Hail, Caesar!)

I caught up with McQuerrey and Ahn to talk about the post process — edit prep, navigating the director-editor relationship, producers’ notes, and more. Below are five key takeaways from our chat.

#1 – Your first creative meeting is the interview

Once a film is in pre-production, barreling toward the first day of filming, the editor and director may not get much one-on-one time before the edit opens. Luckily, an editor’s initial interview with the director is also an opportunity for preliminary conversations that can help ensure everyone is on the same page tonally and emotionally. That’s one of several topics McQuerrey tries to address when meeting a director for the first time. “I'm looking for real honesty, integrity, and an approach to the film that is decisive in many ways. I try to picture the film and the actors’ performances in it and then really look for a similar sensibility in the approach to the film,” McQuerrey says, adding “And the other thing is, do I like the person?"

“I'm looking for real honesty, integrity, and an approach to the film that is decisive in many ways.”

The interview is also where you dig into specific perspectives you can bring to the project. What makes you the right person to help tell this story? Driveways is centered around an Asian-American mother and son, so Ahn found McQuerrey’s life experience reassuring. “I think it’s important that Katie is mixed race Asian American and that she has a young son. I think that these inform your experiences in the world,” says Ahn. “She was just so in tune with the characters of the script and really understood the strange emotional space that they all inhabited.”

Nearly all films shoot out of order, and every editor has their own way of dealing with the chaos. Before she opens her edit on any film, McQuerrey says she builds a giant spreadsheet listing every scene, including “when they're shooting it, who the characters are in the film, whose point of view is this, and dramatically what's happening in the film just to remind myself what I'm looking for when I'm watching dailies.” To help guide the post-production team, McQuerrey also notes what sound effects and visual effects might be needed.

She acknowledges that she’s not the first to come up with this method; actors and script supervisors already create their own versions of this chart. For her, the idea is that she wants to be as organized as possible before the pressure of an edit begins. “Every indie is a roller coaster ride of an experience,” she says, so it’s especially important that, when the footage starts coming in, she can focus her energy on creative.

The edit for Driveways opened about a week after production began, and McQuerrey started assembling scenes as soon as they were available. Then calamity struck on set, Ahn recalls. “It was a particularly rainy summer in the Hudson Valley that year, and we were also dealing with a very tight production schedule,” he says. 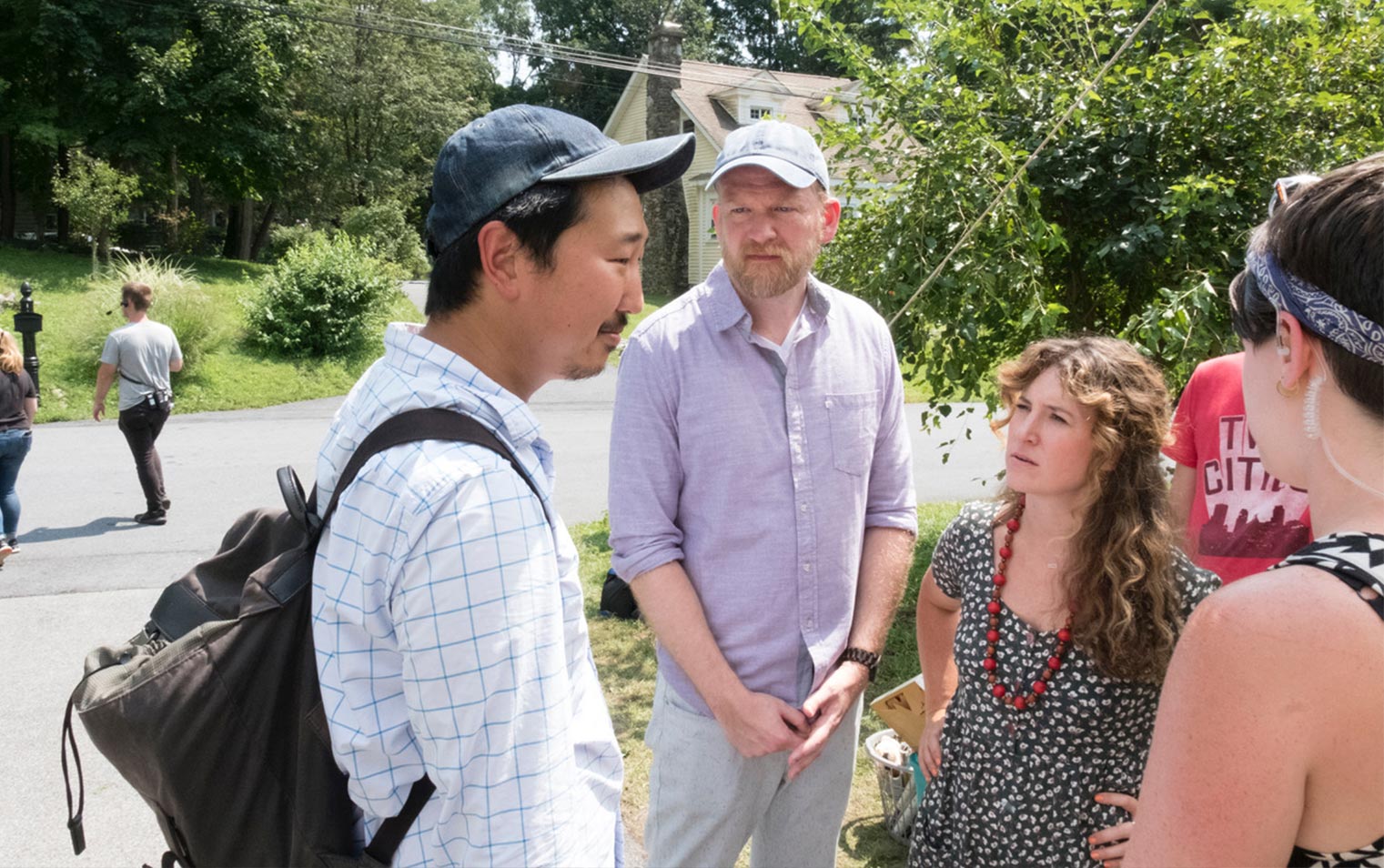 Suddenly, while McQuerrey was working in an edit bay 100 miles from set, she also needed to provide a sounding board for Ahn. “Because the weather was so difficult, it required a lot of rethinking of certain scenes,” McQuerrey says, “and we would have discussions about whether or not I thought certain scenes could go or how to rethink sequences in the film.”

Ahn commends her work ethic: ”We hit the ground running, and we kept running until we finished the movie.”

During the assembly phase, Katie relied heavily on her assistant, Brian McCarthy, who had been her assistant on a previous film, The Kid. In addition to the technical duties of the role, like checking dailies and organizing footage, McQuerrey relied on McCarthy to drop in sound effects, which helped them stay on schedule. “After sixteen years of working with the Coen brothers, sound work is very important for me in terms of keeping up with cutting. Brian and I have a similar taste in sound effects,” she says.

This work not only laid a template for sound designer/mixer Ryan Billia down the line, but it also sped up the assembly and resulted in a more effective editor’s cut, the first version of the film Ahn saw. “A week after wrap, I was at PostWorks in Greenwich Village watching the assembly of the film. It was a quick process. We dove right in,” he says. 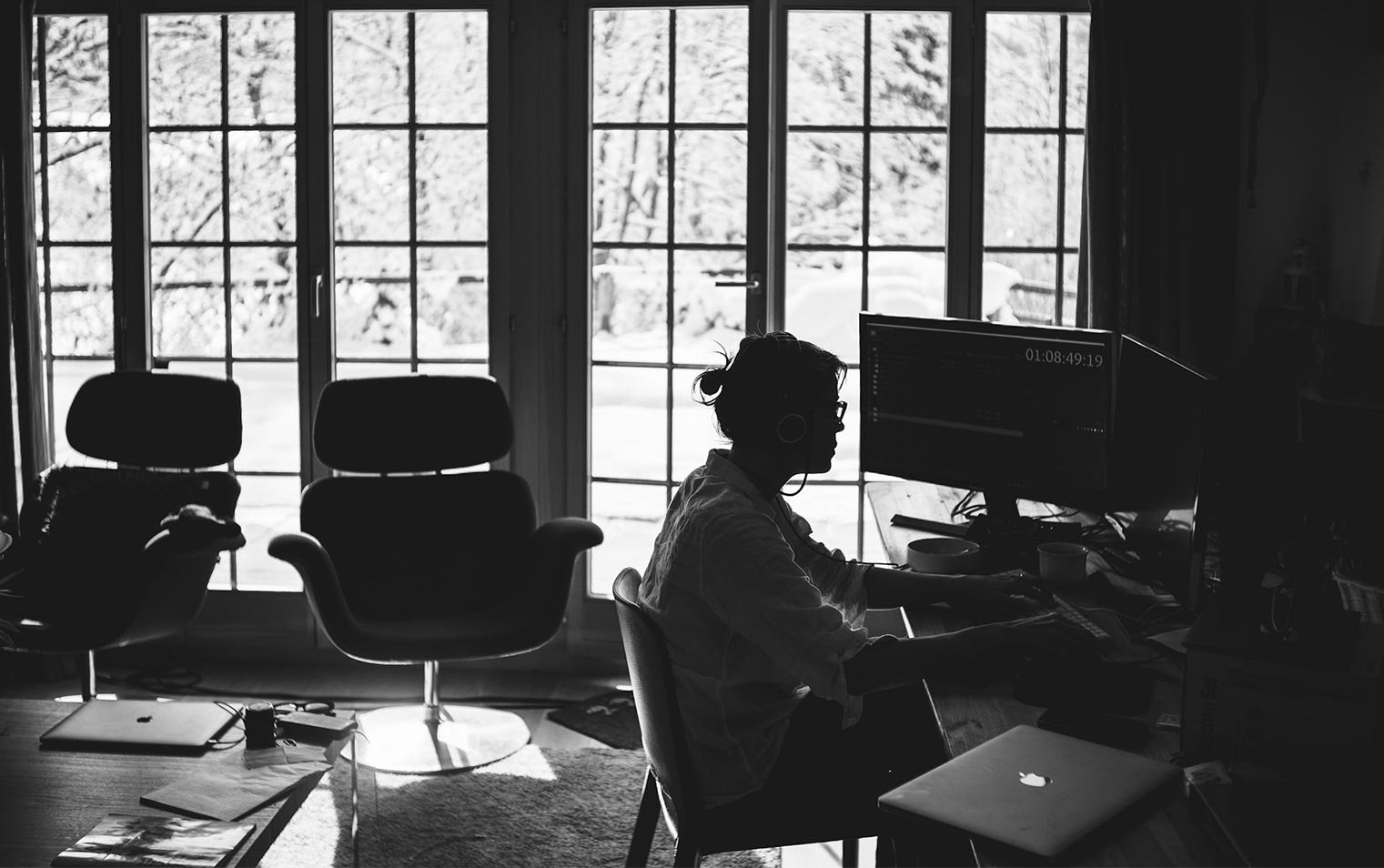 Besides technical assistant work and preliminary sound design, McCarthy also received one-on-one mentoring from McQuerrey, who laments “one of the things that's tough for assistant editors is that there aren't usually a lot of opportunities to cut.” To address this, McQuerrey would give McCarthy smaller scenes that had fewer setups or less dramatic stakes, and then together they would watch down the dailies from those scenes and discuss the approach. The fact of the matter, from McQuerrey’s perspective, is “editing is about editing. You have to edit to get better at it.”

All films have producers, and those producers are going to have notes. Driveways had twenty-five producers. Twenty. Five. Producers. That’s a whole lotta notes!

The thing to remember, says McQuerrey, is “it's me and the director that have to sit in a room and do the work together.” In other words, no matter who sends what notes in, it’s the director who sets the tone when it comes to deciding which notes to take and how best to address each one.

On Driveways, Ahn’s approach was to address as much as possible to make a film that everyone — producers and audience alike — would fall in love with. “That's a tricky task,” he says, “and there were frustrations, but at the end of the day, we had producers who really cared about us and cared about the film, and we had each other to generate ideas. Having Katie in that process was just so immensely helpful.”

In the end, “it was really finding that balance,” says McQuerrey, “and ultimately the notes made the film what it is: a film that is really special.”